View all photos for this blogpost at SmugMug here

Somewhere along the way it was decided that Greg Glassman and his then wife, Lauren, would come up to the first CrossFit affiliate on the planet, Greg would give a seminar, and we would put on a CrossFit Challenge.  September 13, 2003 was the day and up they drove from Santa Cruz.  Greg’s son Blake, Loyd Lewis, Greg Amundson and Kevin (?), also made the trip along with Athena, the CrossFit mascot.

The CrossFit workout “Helen” was chosen for the Challenge, postcards were mailed out to a few folks, an invite was posted on our obscure little website and lots of hope was generated that we would see a few people show up.

The workout “Helen” had originated a few months earlier when Dave and Nick had gone to meet Greg and Lauren for the first time in Santa Cruz, California. During one of the 6am workouts while they were there, Greg suggested going to the local high school track.  There was a discussion about what equipment to bring and it was decided that kettlebells were easy to throw in the car so that was the only workout tool taken. The crew was: Dave, Nick, Greg Glassman, Matt Mast, Greg Amundson, Dave Leys, and Lani Lau (Dave thinks there was one other person but he can’t remember). At the track, Greg Glassman and Nick, who were not doing the workout, brainstormed about what the workout should be while the rest of the crew warmed up.  Greg and Nick came up with:  run 400 meters, 21 kettlebell swings, 12 pullups, for 3 rounds.  There was a monkey bar structure that would work for pullups at the track.

It turned out this combo exposed everyone’s weaknesses and kicked everyone’s asses and they all loved it.  Matt Mast smoked everyone on the runs, Dave Werner was the most familiar with kettlebells and Greg Amundson excelled at pullups.  The pullups were the great equalizer and Greg Amundson came in first.  Dave came in very last.  He remembers toward the end of the third round, he could only do one pullup at a time and needed to rest for a good while between each one.

After the dust settled, they all went to breakfast and discussed how potent the workout was.  They decided this one needed to be remembered and revisited as a benchmark workout – hence “Helen” was born.

On the day of the CrossFit seminar at CrossFit North, about 20 – 25 people showed up.  Greg explained to the small crowd; what CrossFit was, the need for intensity, how to train different metabolic pathways, how slow steady aerobic work had been over emphasized, and the benefits of positive hormonal responses to short intense workouts and strength training.  Questions were answered, laughs were had.

Eventually from this seminar came Rainier CrossFit in Puyallup, WA; Eastside CrossFit in Bellevue, WA; and CrossFit Vancouver in British Columbia, Canada, the first CrossFit affiliate outside the United States.  Not shabby.

A few hours after the seminar, we registered everyone who wanted to participate in the CrossFit Challenge, went over what the Challenge was and said the magic words…3, 2, 1, GO!  Dave didn’t lose this time.  This time it was Kurtis Bowler’s turn to realize he needed to work on his pullups.  Kurtis mentions this in an interview here.  Greg Amundson spanked everyone again.

Dave and Nick had met Kurtis a few months prior at a USAW Olympic weightlifting coaching course taught by John Thrush at Tyee high school in SeaTac, Washington (about 20 minutes south of Seattle).  At this coaching course Dave and Nick not only met Kurtis but Mike Ng and Joel Jamieson as well. During the course, Dave and Nick talked regularly about this unknown program they were doing called CrossFit and highly recommended everyone there try it.

Dave remembers one of the first things John Thrush said as he started teaching the course, “If any of you are pursuing Olympic weightlifting for health or fitness, you are making a mistake.  Olympic weightlifting will wear out your body and ruin your joints”.  Coach Thrush had focused exclusively on competition and his athletes competed at national and world levels.  However, Dave understood that he and Nick were not interested in competing in a serious way but could learn the skill and gain the benefits of the weightlifting movements.

Ironically Dave remembers almost all of the people at this coaching course were there to learn the lifts for health and fitness reasons.  Kurtis, for one, was adding them to his strongman training.  Dave said he and Nick would often recall, as the years went by, what a turning point this coaching course was for them in terms of what they learned and who they met.

After the CrossFit Challenge, Dave and I invited everyone over to our house for a barbecue. Greg and Lauren bought some great steaks and Kevin over salted them but everyone got plenty of protein.

The next morning many of the same people who did the Challenge showed up for another workout.  I participated this time and got thrashed on the finisher that Greg prescribed of 100 bodyweight squats in a row.  I remember very clearly doing my first CrossFit workout when we were at the storage unit (see In the Beginning post).  The workout was short sprints, box jumps and some weighted movement (I don’t remember what exactly) for several rounds.  When I finished, I remember thinking I wasn’t sure if I would ever try this CrossFit thing again. Ha!

After the workout, we all went to breakfast and then said goodbye to our friends as they got in their cars to head back down to Santa Cruz.  So many seeds planted, it was just a matter of time. 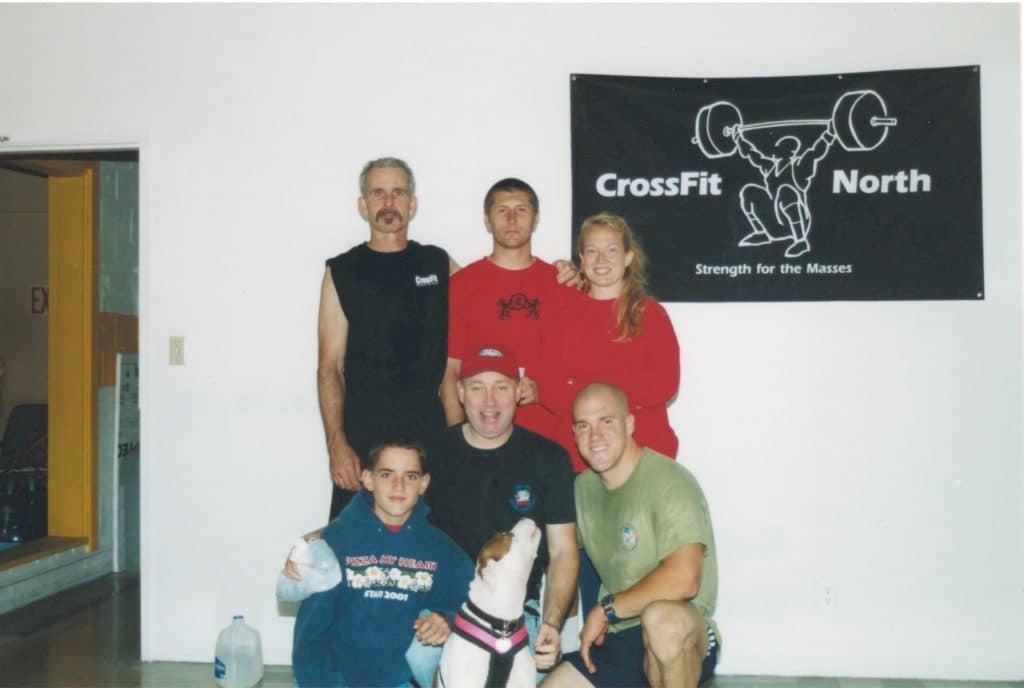 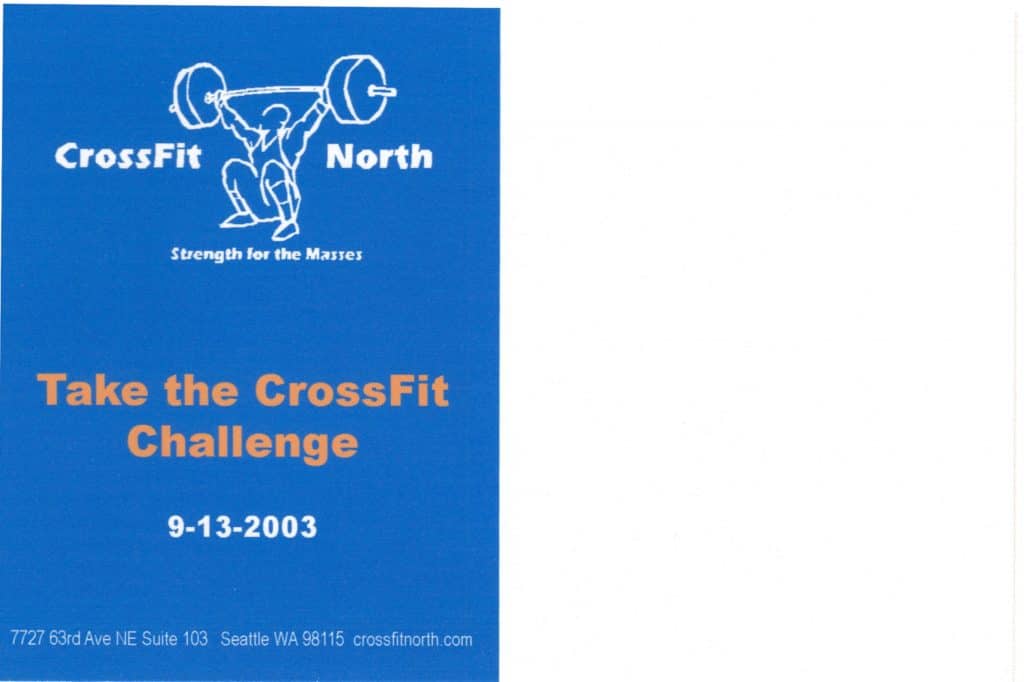 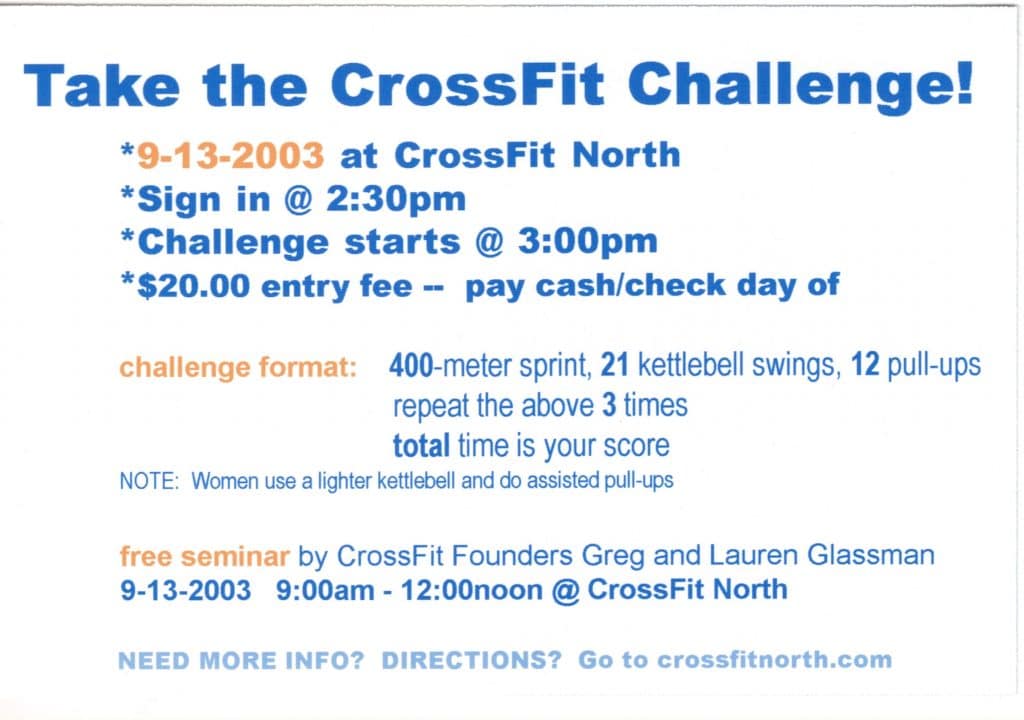 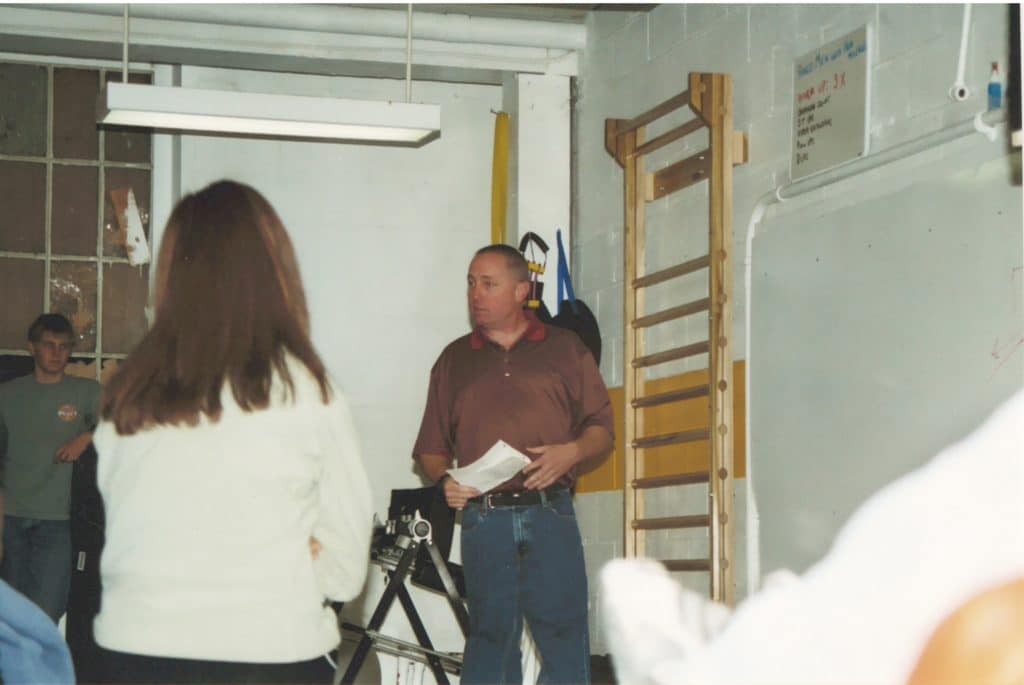 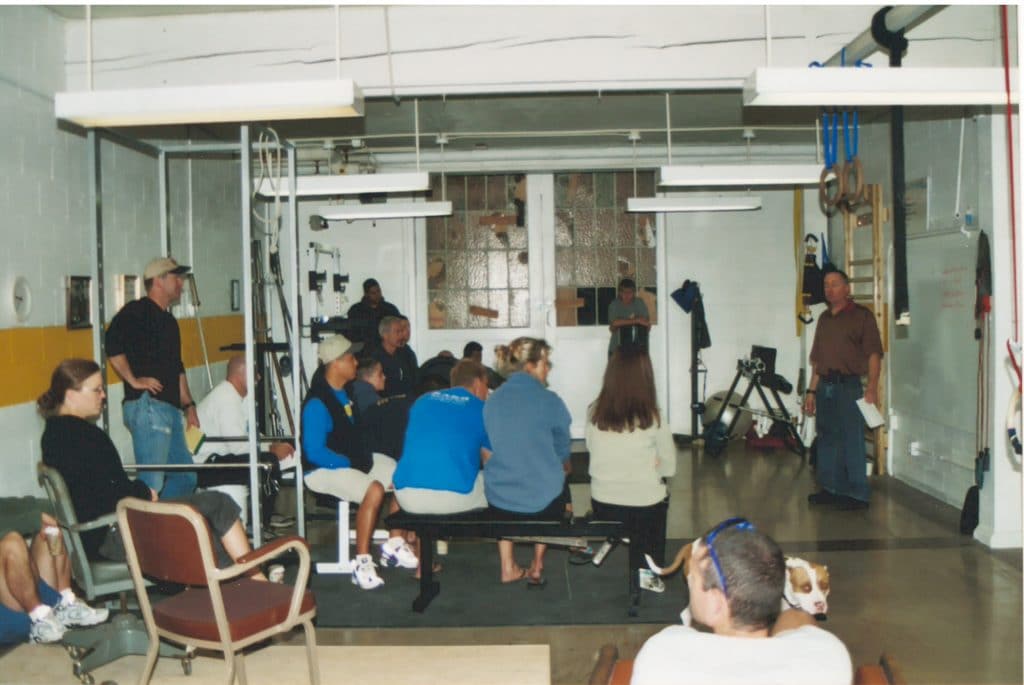 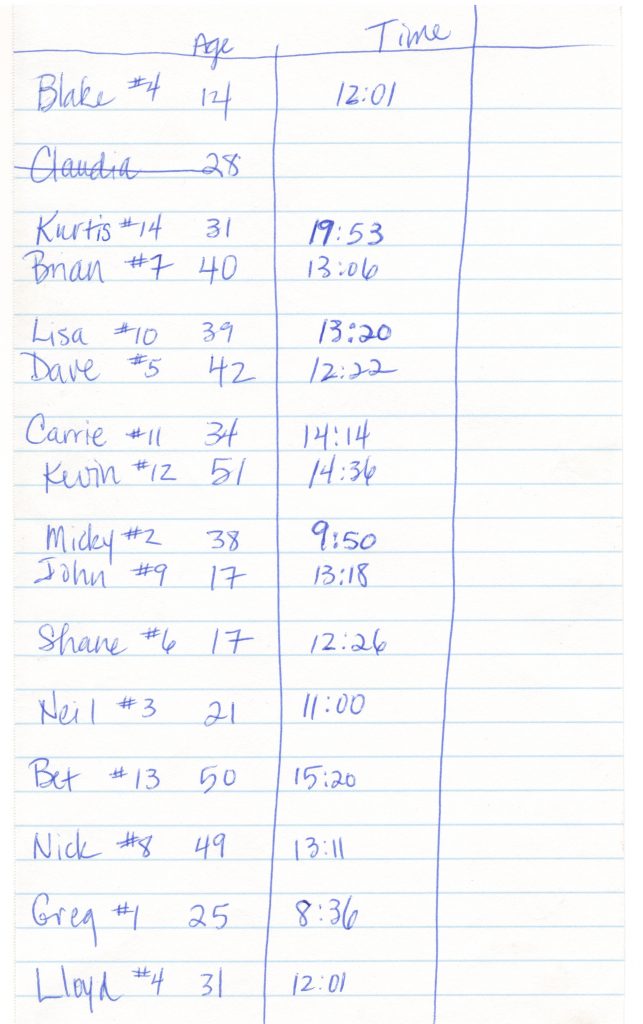 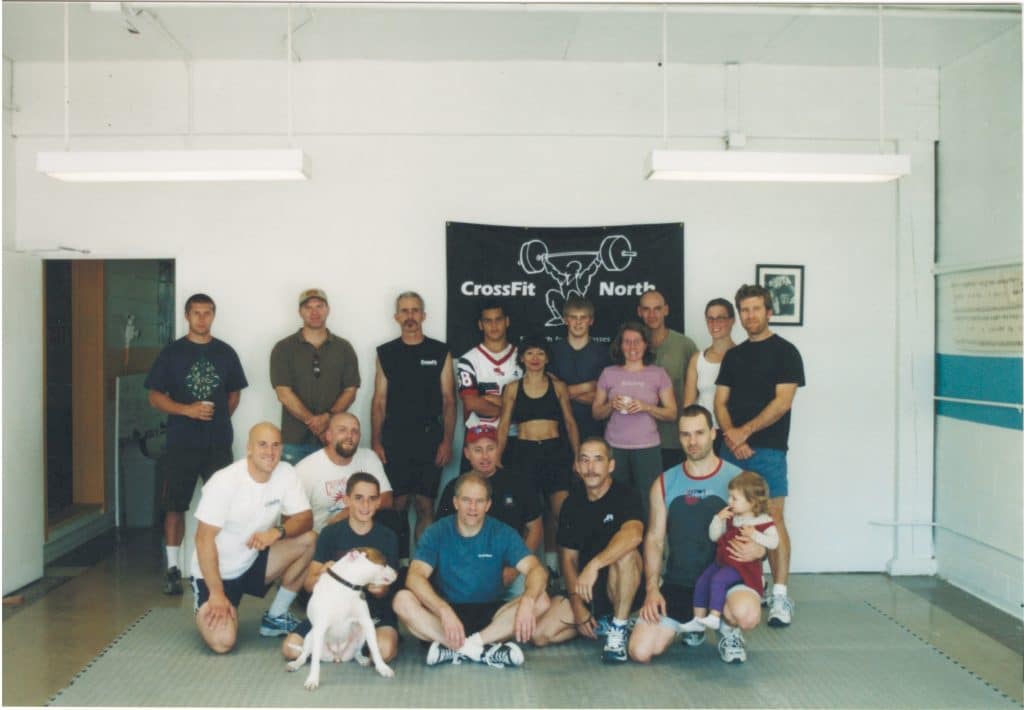 Competitors of the CrossFit Challenge, September 13, 2003 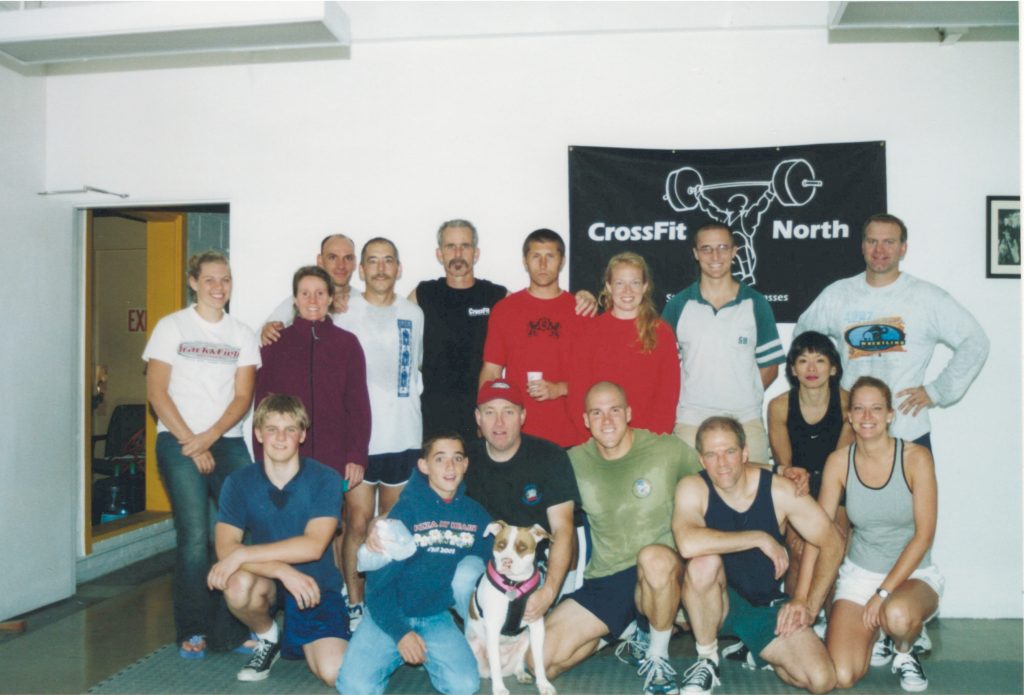 The day after the CrossFit Challenge a bunch of us meet up in the morning to do another workout before the CrossFit crew drives back to Santa Cruz, California, September 14, 2003