How I Fixed My Back and Overcame Debilitating Pain 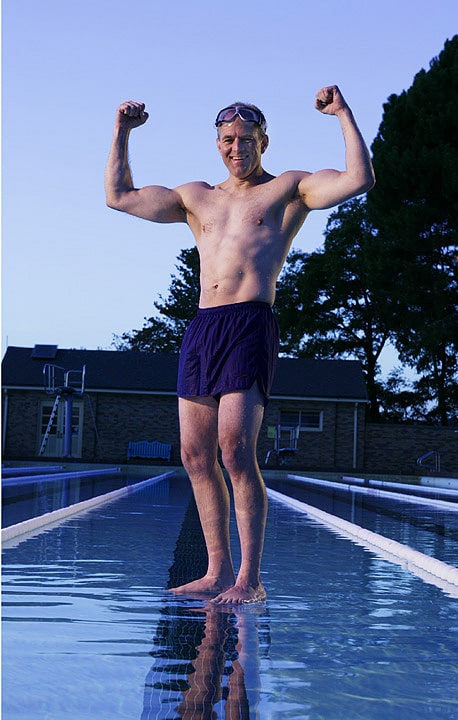 In my late 30’s, I was hobbling around with a cane, the result of debilitating back injuries. Today, it seems kind of hard to fathom, but the truth is, I spent years convinced that I was stuck – that I would live out my life in pain. I ended my career as a Navy SEAL because of my back; I tried surgery and pain meds; I lost my conditioning and gained weight; and, on top of all that, I was miserable to be around.

And then, I had an a-ha moment. That’s what led to moveSKILL. But it was a long journey getting here.

At age 29, I had a triple hemi-laminectomy to repair three ruptured discs. Although the surgery “worked,” it also caused problems. Missing intervertebral disc tissue left me half an inch shorter and very sensitive to impact. Scar tissue at the surgery site interfered with nerves and caused permanent damage to the function of my right leg.

My doctors all said the same thing: if drugs and surgery hadn’t helped, nothing else could be done. For years, I accepted that version of events.  I was told to avoid putting my back under any stress, and I listened. But the pain grew worse.

And I continued to accept that, too.

From hopelessness to insight

At first, I learned to live with a constant ache. But as time went by, the problems intensified. By 1999, just sitting down caused blinding flashes of pain that left me gasping. Standing back up was worse. Eventually, I couldn’t even stand without help.

One day, the pain got so bad my wife, Nancy, took me to the emergency room. Leaning on Nancy, I was ashen. After hours of waiting, I hobbled over, chewed out the nurse behind the counter, and we went home.

The next morning I had no use of my right leg. I couldn’t even feel the thing.  I just stayed in bed. Over the course of a few days I managed to walk, but I had to swing my leg around like a pirate’s stump. It was a low point.

And finally, a light bulb went on.  I realized three things:

It all seems so clear to me now, but back then, it was startling. The conventional wisdom was (and to some degree still is) that you can’t get stronger with a bad back. I had accepted that story for years, and therefore felt like my pain and continuing degeneration were outside of my control. Finally, I realized I had to help myself.

It was a wonderful moment. Because now I was free to find solutions.

Years of research, and, finally, an end to pain

Throwing the old advice out the window, I began a slow, careful exploration. I spent hours in the library (yes, the library!) studying training methodologies. I tracked down books by obscure coaches and contrarian thinkers. I learned about spinal mechanics. I drew on my engineering background and began to really understand the role torque and leverage had on the spine.

And I worked. Hard. I did flexibility exercises. Strength training. Kettlebells.

Eventually, I found CrossFit, which at the time was brand new.  This was deadlifting and squatting and pushing to exhaustion – the stuff doctors said I should avoid. And guess what? My back improved.

Having been through this life-altering experience, I wanted to share what I had learned, so in 2002 Nancy and I opened Level 4 CrossFit Seattle (previously named CrossFit North), the first CrossFit affiliate on the planet. I gave up my engineering career and have devoted myself full-time to the science of human movement.

It’s worth pointing out that at its core, CrossFit is about functional movement. As you squat and deadlift, you learn to use your hips and maintain a neutral spine. Over time, you begin to move better.

Level 4 has become a kind of fitness laboratory, where I’ve been able to hone the focus further. With thousands of clients over the years, we’ve learned what really works – not just for back pain, but for general fitness. That’s what’s behind moveSKILL.

The most important lesson I’ve learned over the years? The body adapts to whatever you ask it to do. I mean everything. The way you stand, the way you sit….your body is going to adapt. That means whatever it is you’re doing – including being sedentary – is what you’re becoming.

Yet there’s a flip side of this, too. I’ve learned you can change your body in profound ways – if you set out to do that.

← Prev: Handstands - Why Do Them? Next: Moving Beyond An Injured Back →