Moving Beyond An Injured Back 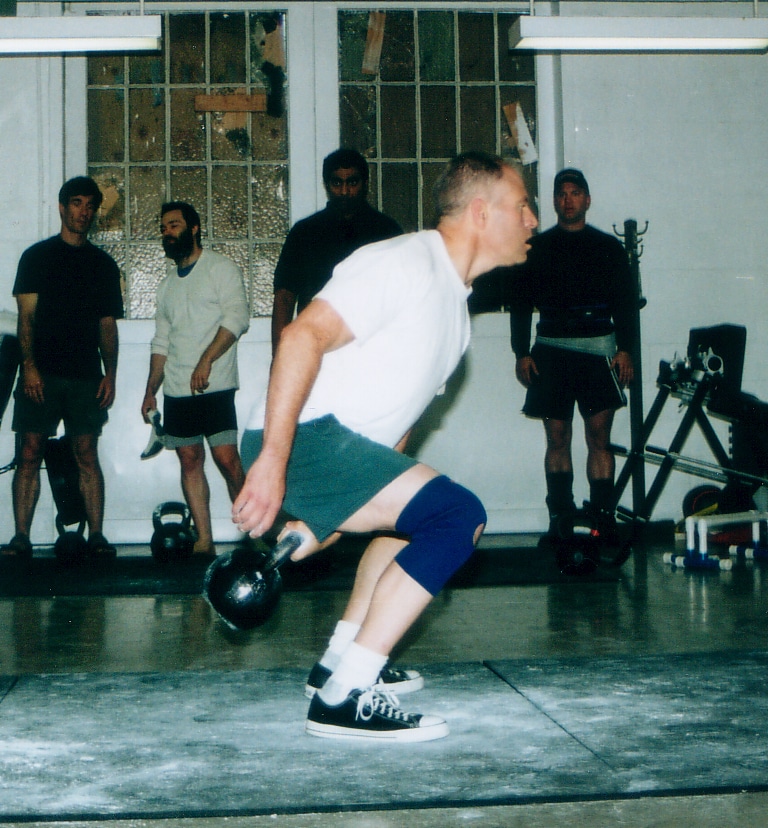 People with back pain are often skeptical that exercise can help them. “My back hurts so much that I can’t even tie my shoes. How do you expect me to work out?” they ask.  This article describes how I rehabilitated my own severe back problems and what I learned along the way.

In 1999 I had such severe back pain and associated problems that I seemed headed for a life of disability. Career-ending injuries and surgery made it hard to imagine regaining the high level of fitness I had maintained as a Navy SEAL. But today I’m stronger and healthier than I was at my earlier best.

Things had been getting worse for weeks. I had gone to the doctor a few times and had gotten strong pain drugs. After a while those didn’t work. The chronic, round-the-clock ache that I had grown used to had now reached a level of intensity which drove all other considerations from my mind. Sitting down brought blinding flashes of pain which left me gasping. Standing back up was even worse. It finally got to where I couldn’t do anything without severe pain. My wife, Nancy, was frustrated to the point of tears at being unable to help.

When I couldn’t even stand without help, we went to the emergency room. Just getting me into the car was a big ordeal. I hobbled into the hospital, leaning on the door and on Nancy, ashen with pain. After hours and hours of waiting while people with cut thumbs or running noses were treated and moved along, I hobbled over, chewed out the nurse behind the counter, and we went home.

The next morning I had no use of my right leg. I couldn’t even feel it; nothing worked. I stayed in bed. Over the course of a few days I became able to swing my leg around like a stump. I still couldn’t feel the leg at all, but I could stand on it. Walking involved swinging the damn thing under me like a pirate’s wooden leg.

This state of constant pain and near invalidism was a long drop from my physical peak. Lean and fast, I had spent twelve years as a Navy SEAL, thriving on the hard work and the joy of physical competence under arduous conditions. Long ocean swims, extended back-country ski marches in Arctic terrain, slipping quickly through woods and mountains at night—these were the activities that I loved and was good at. It was difficult to comprehend my current reality of shuffling through a sedentary life.

My time as a SEAL had ended in 1991 with three ruptured lumbar discs and an operation. Although the triple hemi-laminectomy “worked” and allowed control of my right leg, the surgery also caused problems. Missing intervertebral disc tissue left me half an inch shorter and very sensitive to impact. Scar tissue at the surgery site interfered with nerves and caused permanent damage to the function of my right leg. My many doctors were all saying the same thing: if drugs and surgery hadn’t helped, nothing else could be done.

The realization that no help was forthcoming from the medical field was a call to action. I would have to help myself. It dawned on me that as I had become weaker over the ten years of inactivity since my surgery, my back problems and pain had gotten worse. A light bulb went on. Getting stronger again would help! It seems painfully obvious now, but that realization directly contradicted the medical advice I’d been given.

We are fortunate to live in a time of unprecedented access to information. The first new idea I found was kettlebells. It was early 2001 and Pavel Tsatsouline had just released his book Russian Kettlebell Challenge. I bought a kettlebell and started swinging. It helped. Not long after that my friend and workout partner, Robb Wolf, pointed out an interesting little website which listed daily workouts. Robb and I decided to follow the workout suggestions posted daily on CrossFit.com. My recovery went into overdrive as I regained strength and work capacity.

Seven years later, life has changed dramatically. I still have damaged nerves which cause loss of control and feeling in part of my leg and foot. Chronic pain, however, is a thing of the past. Weeks and months go by when I don’t think about my back damage at all. By most measures, my strength, fitness and ability to move is better than it ever was.

Lessons learned through return to movement

It is not necessary to have ever heard of “neutral spine” to understand its effects. When bending to reach for something, I would frequently lose control and—gasping in pain—fall, unless something was nearby to grab. Aside from feeling quite silly for causing all that drama, this loss of control was annoying. I learned to keep my back straight.

Train to avoid movements that cause pain. CrossFit founder and coach Greg Glassman wrote a piece called “A Costly Biomechanical Fault: Muted Hip Function (MHF)” (CrossFit Journal, January 2003). This article and the accompanying illustration gave me a powerful insight into why some movements cause pain and how to train to avoid those movements. After absorbing the muted hip function article, I understood why the kettlebell training had helped and what further training might be useful.

A five-stage approach can resolve back pain and malfunction. My understanding of neutral spine, spinal health, and proper hip function was given another boost in 2004. Dr. Stuart McGill, a professor of spine biomechanics and chair of the Department of Kinesiology at the University of Waterloo, released a book titled Ultimate Back Fitness and Performance.

Dr. McGill lays out a five-stage approach to resolving issues with back pain and malfunction:

Stage 3. Increase cardiovascular endurance and specific muscle stamina. This will lay the foundation for development of strength and allow you to maintain proper movement patterns at all times.

Stage 4. Build strength. This is not done by training muscles, but by training movements! Multi-joint movements executed by the body in 3D space without external support are a crucial training tool for developing “functional strength.” Gradually increasing the load and/or speed demands placed on the body during movement training allows development of strength-coordination as well as the proper timing and steering of strength.

Dr. McGill’s guide to developing a healthy functional hip/spine structure is an excellent way to prepare for the high intensity which CrossFit workouts demand. These five stages are also the same progression Coach Glassman has recommended. The difference between training people with back trouble and healthy athletes is simply that the former require slower progress with an even more careful emphasis on excellent movement patterns at all times.

At the time of this writing, my physical health and ability has recovered beyond anything I would have dared to hope. Careful, consistent practice has resulted in performances at age 46 that I didn’t have as a 25-year-old SEAL. A 2x bodyweight deadlift, 44 pull-ups, 9-minute Helen, 500 meters on the Concept II in 1:30—none of these feats are very noteworthy except that they would have seemed pure fantasy to me not very long ago.

With safe exercise, and an understanding of what makes it safe, people can improve their back health and quality of life.

← Prev: How I Fixed My Back and Overcame Debilitating Pain Next: How Much Weight Should I Lift? →